Someone might want to tell this idiot what the actual definition of ‘racism’ is – it has nothing to do with institutional religion or a political philosophy, you moron. And double dunce points for not realizing she was being video taped while lying. A deep, deep stupidity bonus for then doubling-down with the lies and filing a formal complaint, which got her in real trouble. She really tried to cost this policeman his job – her attorney is now claiming that it was not her under that bag. Fail. No wonder she claimed she couldn’t show her face because of her religion. Unfortunately for her and fortunately for everyone else. they don’t have Shariah Law in Australia. Malicious and ruthless describes her perfectly[1]. 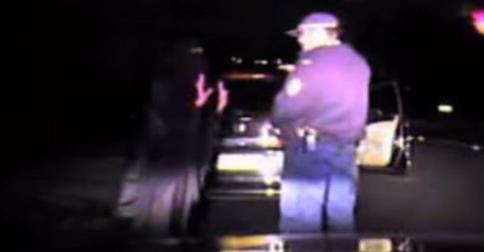 What happens when a Muslim tries to use Shariah law[3] during a stop by a police officer who has a dash cam rolling the entire time? Justice, that’s what. (H/T TopRightNews[4])

It started when Carnita Matthews, a mother of seven and sporting a burqa covering everything except the eyes, was pulled over by police in Australia for a random breath test.

She didn’t have her provisional license on her which is an important, required item for immigrant drivers in the country. So the police officer, followed the law and issued Matthews a citation for failure to provide proof of the document.

Instead of accepting the ticket and going about her business, she decided to take another approach.

Matthews began a long, hysterical rant directed at the officer that accused him of racism because she was wearing a burqa, essentially saying that the only reason he issued her a ticket is because of the way she dressed.

After her embarrassing tirade was over, she quickly walked back to her vehicle and drove off.

The story, unfortunately, doesn’t end there. Not long after the incident she must have checked her Shariah law playbook and decided to go on national television to tell her “side” of the story.

During her fifteen minutes of fame, she claimed that the officer actually pulled her down by her veil and that he was completely out of line. Her accusation posed a serious threat to the officer’s career and livelihood.

But Matthews, who obviously didn’t ace Shariah law training school[5], didn’t realize one little detail that she should have probably thought about before publicly wrecking this honorable police officer’s reputation — there was a dash-mounted camera and microphone rolling during the entire incident, from start to finish.

When the judge watched playback of the incident, he immediately cleared the officer and sent Matthews to jail, for six months.

The video was shown on Australian television to clear the officer’s name and restore his good reputation.

Matthews’ shady lawyer actually tried to defend her by saying that it wasn’t Matthews on the tape, but a mountain of evidence proved otherwise.

She got six months, but is out on bail. That was a mistake. They are now saying she has children and shouldn’t go to jail. Bull crap. She should go for the full six months and then she should be expelled from the country. The police are right, there should be a full ban on the burqa in Australia and across the planet. Enough of this Shariah law crap, where there is one set of laws for Muslims and another for everyone else. Your faith doesn’t give you the right to break the law, lie, file false charges or verbally abuse others. They should have to show their faces, instead of hiding behind Islam like cowards.