Is Member of Republican Leadership Kevin McCarthy Having An Affair With Rep. Renee Ellmers?

Like EVERY member of Republican Leadership, Kevin McCarthy has been disappointing. However, he hasn’t been as disappointing as Renee Ellmers. When Ellmers first ran in 2010, I personally took her around and introduced her to bloggers at events. Back then she was a Tea Party darling, loved the grassroots and couldn’t say enough good things about conservatives. Since then, redistricting allowed her to move to a safer district, she turned on conservatives, got into bed with the Chamber of Commerce crowd and according to Charles Johnson at gotnews.com[1] it looks like she may have gotten into bed with Kevin McCarthy as well. 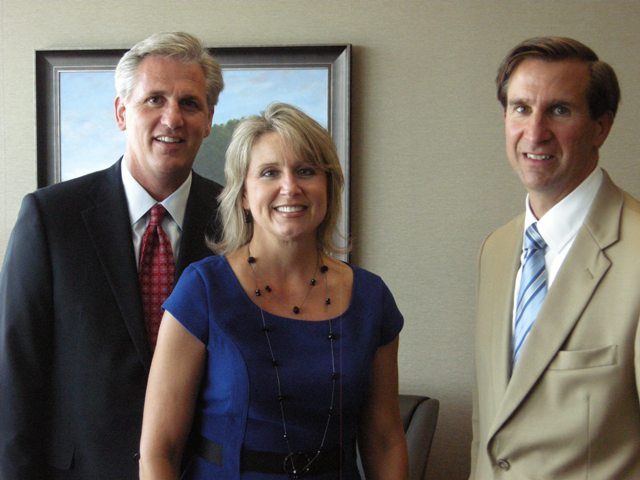 Multiple sources within Bakersfield, North Carolina, and on Capitol Hill tell Gotnews.com that Majority Leader Kevin McCarthy (R-CA) and Renee Ellmers (R-NC) have been carrying on a long-running affair since 2011.

The affair is something of an open secret in Washington, D.C. Reporters at other publications, lobbyists, congressional staffers of both parties all know about it. One staffer for a congressman describes it as the “biggest open secret” in D.C. A lobbyist describes Ellmers as a “social climber who has ingratiated herself” with McCarthy.

House leadership also knows about the affair. Speaker John Boehner reportedly told McCarthy to stop the affair once McCarthy was elected Majority Leader says a well placed congressional staffer. At least one leadership staffer doesn’t think the affair ended. “They are unusually close,” says the staffer who insists that the affair is going on. “It’s weird if he’s not f*cking her.”

Ellmers, who was elected in 2010, has traveled with Kevin McCarthy throughout North Carolina on the campaign trail in 2014. McCarthy campaigned for Ellmers during her 2014 primary challenge with radio talk show host Frank Roche.

…Calls and emails to Reps. Ellmers’s and McCarthy’s offices were unreturned.

Gotnews.com also reached out to Brent Ellmers, her husband, but hasn’t heard back.

Is that ironclad? Well, it’s not as strong as, “We’ve seen John Edwards coming out of the same hotel room as Rielle Hunter,” but it seems stronger than the New York Times’ claim that John McCain had an affair with Vicki Iseman. Since the Times apparently paid out on a defamation suit because of that one, it better be. Of course, “affair” stories are always hard to prove because all the action happens behind closed doors and people keep their mouths shut; it’s hard to prove. Ellmers and McCarthy both have incentive to stay quiet; so we’ll have to see how this plays out.