John McCain was a War Hero, but he’s also a Loser and an attacker of fellow Republicans 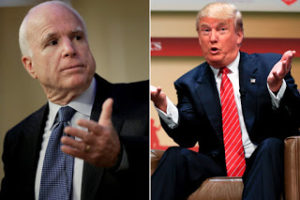 [1]John McCain listened to GOP consultants and refused to make Barack Obama’s personal history part of his 2008 presidential campaign. A wealth of information was there for the taking, Jeremiah Wright, Bill Ayers, Obama’s upbringing, his drug usage and other factors that pointed to Obama’s radical nature were left on the table by John McCain. He predictably went on to lose the election with plenty of bullets left in his gun.

Bu, McCain never seems to have a problem going after fellow Republicans or more specifically conservatives. He called Ted Cruz and Rand Paul a ‘wacko birds’[2]. And most recently McCain insulted millions of fellow Americans as “crazies”[3] for supporting Donald Trump[4].

Why isn’t John McCain being held responsible for his insults?