How dumb is Ben Affleck on Islam?:Affleck and Bill Maher disagree over criticizing Islam (Video)

I actually like Ben Affleck, but on Bill Maher he exposed himself as a typical emotional Liberal who ignores reasoned arguments that conflict with their view of the world. I give credit to Maher, whose an Agnostic Liberal yet he has surprisingly enough intellectual honesty to view Islam for what it is, a brutal religion that encourages the killing of apostates. 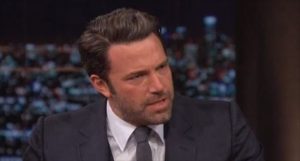 “Why are you so hostile about this?” Maher asked Affleck.

“It’s so not,” Maher insisted, though Affleck compared it to using the term, “Shifty Jew.”

“You’re not listening to what we are saying,” Maher insisted.

“You guys are saying, if you want to be liberal, believe in liberal principles,” Affleck said, referencing Maher’s monologue last week. “Like, we are endowed by our forefathers with inalienable rights, all men are created equal.”

Harris, who had complained about criticism of the Muslim religion being dismissed as Islamophobic, countered that liberals should be allowed to criticize bad ideas.

“Islam is the motherload of bad ideas,” Harris argued.