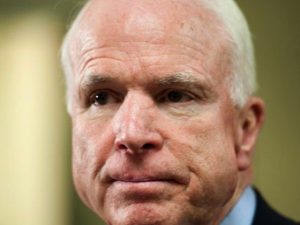 [1]I used to have a lot of respect for John McCain, war hero and all that. I actually left the Republican Party in an act of protest when New York GOPers tried to keep his name of the primary when he ran for president before the 2000 presidential election.

But, somewhere along the way I noticed that John McCain has a bad habit of being very nasty to conservatives, like Ted Cruz. His latest bit of unkindness was when he went public with his concerns about Ted Cruz’s eligibility to become president. Really John? Did you have to open your mouth about that knowing the corrupt media machine would feast on it?

John McCain is like the rest of the GOP establishment, a waste of time. Hopefully, his ilk can be removed from the political landscape to do the country some good.