Harry Reid lets cat out the bag : Obamacare is a Trojan Horse toward eventual single-payer system 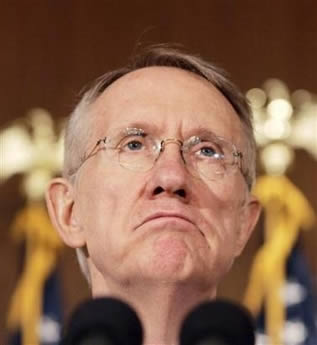 During Obamacare debate I along with many other conservative bloggers, talk radio, and Fox News screamed about how Obamacare was designed to fail from the very beginning in order for the Federal government to swoop in and pick up the pieces with a single payer system.:

What have we’ve been seeing?:

All this was predicted by many and Sen. Majority Harry Reid, one of the most miserable creatures in the history of U.S. politics, confirmed last night there was a motive behind the planned madness according to the Democrats long planned design.:

But already, Senate Majority Leader Harry Reid is predicting those plans, and the whole system of distributing them, will eventually be moot.

Reid said he thinks the country has to “work our way past” insurance-based health care during a Friday night appearance on Vegas PBS’ program “Nevada Week in Review.”

“What we’ve done with Obamacare is have a step in the right direction, but we’re far from having something that’s going to work forever,” Reid said.

When then asked by panelist Steve Sebelius whether he meant ultimately the country would have to have a health care system that abandoned insurance as the means of accessing it, Reid said: “Yes, yes. Absolutely, yes.”

The idea of introducing a single-payer national health care system to the United States, or even just a public option, sent lawmakers into a tizzy back in 2009, when Reid was negotiating the health care bill.

“We had a real good run at the public option … don’t think we didn’t have a tremendous number of people who wanted a single-payer system,” Reid said on the PBS program, recalling how then-Sen. Joe Lieberman’s opposition to the idea of a public option made them abandon the notion and start from scratch.

Reid cited the post-WWII auto industry labor negotiations that made employer-backed health insurance the norm, remarking that “we’ve never been able to work our way out of that” before predicting that Congress would someday end the insurance-based health care system.

Unfortunately, there are literally millions of ill informed Americans that haven’t the slight clue what’s going despite all the shouting.:

: Originally published at The Last Tradition[8]