How much did it cost U.S. taxpayers to airlift Bo, the First Dog, to Martha’s Vineyard? 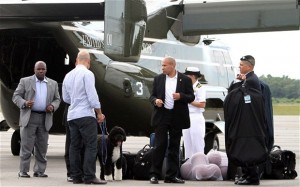 [1]President Obama really doesn’t give a rip about fiscal responsibility when he knows the American people are footing the bill to fly his dog on his own plane to join the Obama’s on vacation.:

National Review[2] reports among the many stories the prestigious American monodailies presently being unloaded at fire-sale prices don’t have room to cover is this heartwarming report from the London Telegraph — the First Dog and his entourage flying in to Martha’s Vineyard on his own plane[3]:

Bo, the president’s Portuguese Water Dog, arrived separately on one of two MV-22 Ospreys, a hybrid aircraft which takes off like a helicopter but flies like a plane.

This is the worst kind of arrogance and hubris ever displayed by a U.S. president when millions are struggling to put food on the table.